He dipped his head
and snorted at us.

We heard the miniature
thunder where he fled,

Thank you for your interest in Om El Shahmaan. We have been waiting many years for a Sanadik son that we felt would provide a major step for the future of our breeding program. The steps so far in our breeding program have been significant ones. The success of this program began with *Estopa, who was named one of the “Top 5 Most Influential Mares of the 20th Century”. The next step was her son, *El Shaklan, who was a multi-national champion and became one of the world’s most sought after sources of world-class show and breeding stock. The *El Shaklan son, *Sanadik El Shaklan, was the next major step in the evolution of our program with his ability to sire world class type with his unmistakable stamp of type, elegance and refinement. Now, Sanadik has sired a son who carries the future of the Om El Arab International breeding program to new dimensions. His name is Om El Shahmaan.

Om El Shahmaan has the classic type that is the trademark of his sire, grandsire and grand dam. His face is finely chiseled and dished. His shoulder is well laid back and his neck is graceful and arched. His legs are long and clean. But Shahmaan also has that something extra that sets him apart, a unique class and elegance that are hard to quantify.

Shahmaan’s dam is our exquisite *Estopa daughter, Om El Shaina. Her sire is the ethereal and highly respected, World Champion Stallion, *Carmargue. Many visitors to our farm are captivated by Shaina and we often hear the comment that she is one of the most beautiful mares they have ever seen. The cross of Sanadik and Shaina has consistently produced extraordinary individuals.

Besides being beautiful, Shahmaan is a “horseman’s horse”. He is correct from the ground up and his nature is willing and tractable. As such, his qualities are also being sought after by performance trainers. Illustrating his versatility and athletic nature, Shahmaan was also shown under saddle and earned the title of Pacific Slope Reserve Champion Hunter Pleasure Junior Horse, shown by Janina against successful professional trainers. 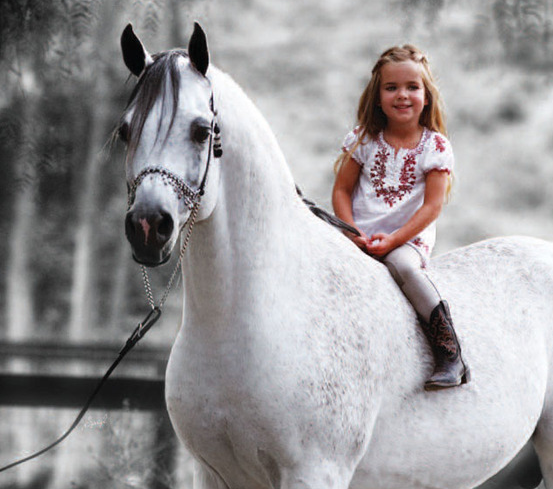 Shahmaan is an AHA Sweepstakes Nominated Sire and a Scottsdale Signature Stallion.

For those breeders who are drawn to the Arabian horse for their dramatic beauty, Shahmaan is stamping his foals with the exotic Om El Arab “look”. Eclipsing his sire and grandsire, Shahmaan’s get have even more exotic type and refinement. They have more reach, elastic motion, athletic ability and charisma, all reasons why we regard Shahmaan as a major step in the evolution and advancement of our breeding program.

His children have won championships in both halter and performance the world over. Their titles include World Cup champions and International champions.

Om El Shahmaan plays an important role for us and for many breeders around the world. We welcome your inquiries and look forward to talking with you about what Om El Shahmaan can do for your breeding program.