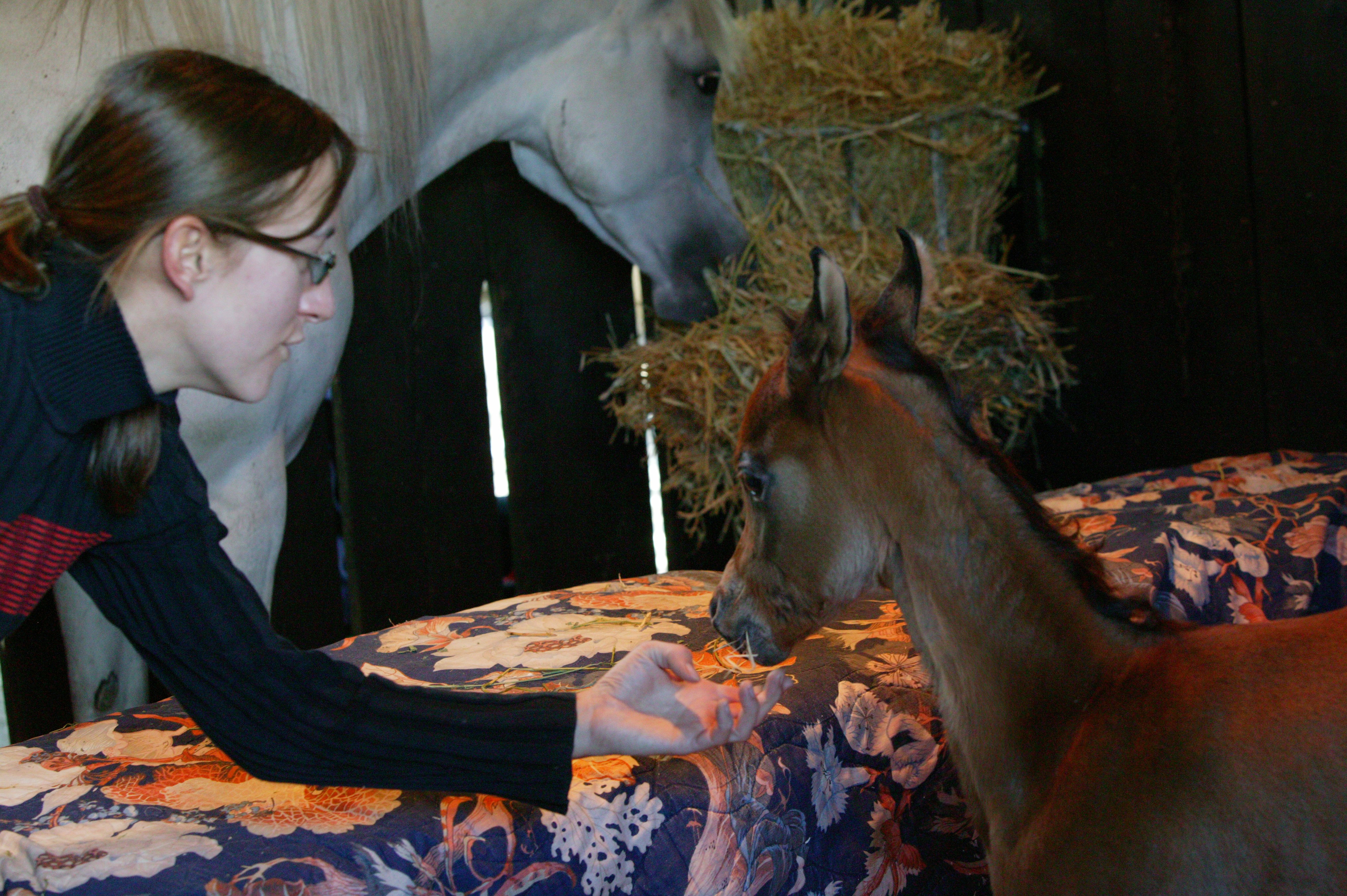 The positive feedback that I have gotten from people who have read my first three blog posts has been overwhelming.  You guys really know how to shine love and support onto a girl!  Thank you!!!  Writing, I have found, is an incredible way to process just about anything that is happening in life.  I have always known this, or at least have been told by people who regularly journal, but frankly I’ve been a bit too lazy to journal in the past. I’ve never really gotten past one or two entries before I put the journal away and never look at it again, until this life-changing event of my mother’s death forced me to find a way to process my emotions.

I wanted to write about a different subject today and give everyone, including myself, a break from mourning!  This story is also about a strong, beautiful being with zest for life and a legacy that she is creating.  It is a story about a little filly named Om El Shahmaandura, that was born nearly 6 weeks premature, and her struggle to live against all odds.

I happened to be in the barn at 4:30 am, on April 28, 2005 because I needed to load a horse that was going to be flying to Europe later that day.  I noticed that Om El Jimala was not standing as I entered the barn and I went over to see why.  To my horror she was foaling.  I made the hauler that was picking up the horse load it himself as I made a phone call for help. We had Jimala and her little filly in our trailer and were heading to the clinic within minutes.  I remember that ride so well.  I held the tiny little foal on my lap for the drive and we arrived at our fabulous vet clinic not long after.  Dr. Phoebe Smith took over and we soon were told that the filly’s lungs and joints were not developed.  If we wanted to try to save her, we could. But the road would be long and hard, and there were no guarantees.  Never ones to give up, we decided to give it a shot.

Shahmaandura was wrapped in a burrito-like contraption to prevent her from standing in the beginning.  Standing would have caused harm to her underdeveloped joints, so the plan was to keep her down and x-ray her joints and lung weekly to see if we were making progress.  She was in ICU on oxygen at the clinic, and showing progress to the amazement of all around her. We were able to bring our little preemie home one week later.

We built a little area in Jimala’s stall for Shahmaandura.  Jimala could hang her head over and nuzzle her foal, but Shahmaandura was protected in there.  We milked Jimala every two hours around the clock and fed our little girl her momma’s milk with a bottle.  As she grew stronger she would stand up and wait for us to feed her.  We learned how to lay her down gently and only then would reward her with her bottle.  It was our hope that her joints would keep developing and that she wouldn’t develop juvenile arthritis from standing.

We all took turns feeding and monitoring Shahmaandura around the clock.  There were so many things to look for and to worry about.  We needed to be careful that she didn’t aspirate milk while we were bottle-feeding her and get pneumonia. Sometimes she was constipated; other times she had diarrhea. Did she have a temperature?  We really learned to look at the details constantly.  Meanwhile Jimala was a perfect mother.  She watched over her baby like a hawk, and kept producing tons of milk even though her filly had never actually had the chance to suckle.  We would exercise Jimala on the hotwalker once a day, and would bring Shahmaandura out in a blanket lined wheelbarrow to watch her mother.  I hope to find pictures of her in the wheelbarrow – it was precious!

On her four-week birthday, I went into the stall to milk Jimala and feed Shahmaandura … and that little firecracker had jumped over her barrier and was nursing on her mother!  We x-rayed her joints right away, fearful that her joints were now compromised. But Phoebe gave us the amazing news that they had formed normally and she was now allowed to stand.  It was truly one of the most wonderful moments in our horse breeding history.  We really thought that she had made it.

Needless to say we fell in LOVE with Shahmaandura.  We had spent so many sleep-deprived weeks caring for her, giving her love and attention, that we were devastated when Phoebe, upon a normal examination one day, told us that it looked like she was going to slough off her hind hoof.  I remember how we all sat in her stall and cried.   It was too much after all that we had been through.  So, of course, we did what we do and looked into ways that we could deal with this sloughing hoof.

My mom had a healing machine that we call “the coil”.   Those who knew Sigi well will smile at this because she had a healing machine for nearly everything.  Someone would sit in Shahmaandura’s stall for an hour twice a day while her tiny little hoof was in the coil.  I would apply sterile bandages daily and used an amputee support wrap that friends in the human physical therapy field had taught me.  Every day, as I took off the wrap I would fear that I would find a sloughed off hoof.   In true Shahmaandura form, this never happened.  She grew a new hoof and the old hoof just slowly got trimmed away.

Shahmaandura has blessed us with two beautiful daughters.  Om El Sharazad is by Om El Al Azeem and has had her first filly this year, making Shahmaandura a grandmother!  Om El Justadorable, by WH Justice is Shahmaandura’s second daughter. She is a vision and was my mother’s favorite young mare.

I also need to mention that Shahmaandura sire is Om El Shahmaan, my favorite stallion in the whole world!  In October 2004 our family drove Jimala and Shahmaan to Lexington KY to the US Nationals.  Shahmaan was named US National Champion AOTH and Jimala was US Reserve National Champion Open Mare.  Little Shahmaandura was in utero.  She was there with her parents during their big win… no wonder she was destined to be special.  Doug Dahmen named her for us.  He told us that Shahmaandura is the light at the bow of a boat that illuminates the water, and the name needed to be given to a special filly.

Miracles do exist.  Sometimes we need to look for them in the little places, and other times they are big momentous occurrences that cannot be denied.  Om El Shahmaandura has shown us how to fight for life, to never give up and to do something meaningful with our lives.  I’ve gone to that story many times in my life, especially lately. And I hope that reading her story inspires you too.