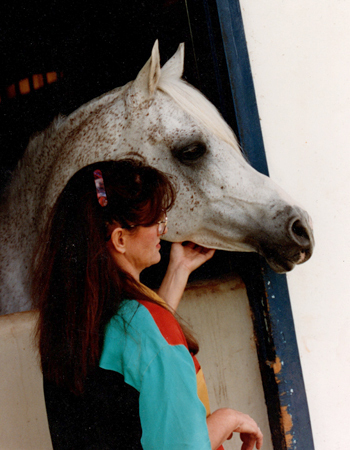 Today, Om El Arab International is nestled in the foothills of the beautiful Santa Ynez Valley in California. This Arabian horse breeding program has gone through four distinct phases in the nearly forty years of its existence. 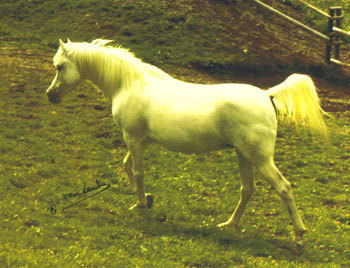 The cornerstone of this world famous breeding program has always been Sigi Siller. However, it was her father, Franz Siller, who bought the first mare for the future program in 1969 from the famous State Stud in Marbach, Germany. This marked the beginning of Om El Arab, and in 1970 the young Sigi together with her soon-to- be husband, Heinz- Ruediger Merz, went on a horse buying spree around the world. They first traveled to Spain, where they purchased eighteen mares. It was in Spain that they were able to acquire *Estopa, who would become the foundation mare of the Om El Arab breeding program. They next traveled to Poland where they bought two mares, including the last son of *Naborr in Poland. He later became the herd sire for Franz Siller’s breeding program. The young couple also traveled to Egypt, and during a visit to El Zahraa State Stud fell in love with a beautiful stallion named Shaker. They were able to purchase him and Sigi added “El Masri” to his name. Shaker El Masri means “thankful to Egypt”. Heinz and Sigi bought five mares from Dr. Sayed Marei of Al Badaya Stud during this trip as well, one of which was named Om El Arab, or “Mother of all Arabians”. Sigi decided that Om El Arab would be a fitting name for the breeding program. 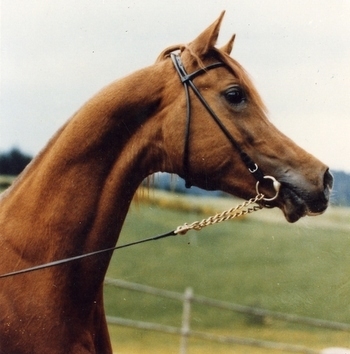 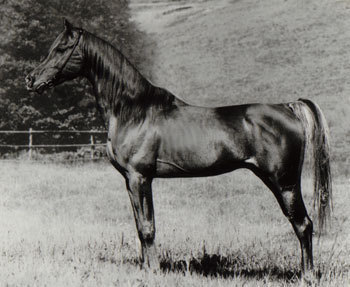 Upon Liane Siller’s death in 1973, Sigi and Heinz stayed on the farm in the Black Forest, and by 1974 the two were running it on their own. This marks the second phase for Om El Arab. The very first filly bred by Om El Arab was *Mohena. She was by the Egyptian stallion Hadban Enzahi and out of the Spanish mare Morisca V, one of the Spanish imports. *Mohena is the mother of *Sanadik El Shaklan, who in later years became a building block for the program and many breeders around the world. 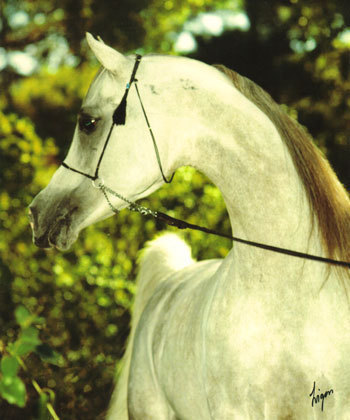 During this time *Estopa was bred to Shaker El Masri, and among other full-siblings produced *El Shaklan. It was almost unheard of and frowned upon in the early 1970’s to breed a Spanish horse to an Egyptian horse, but the foals were so unique and beautiful. In that instance, the “Golden Cross” was born! *El Shaklan was a horse in type and quality before his time. Between 1975 and the early 1980’s, the Om El Arab horses conquered the show rings of Europe. Countless National, European, International, and World Champions were crowned. In 1983, the decision was made to send *El Shaklan to the United States to test the waters and introduce North America to an entirely new look. *El Shaklan stood at Doug Dahmen’s Intara Arabians. After a successful show and breeding season, Heinz and Sigi purchased land in the Santa Ynez Valley, California, in October of 1983. The quintessential Spanish-style barn was built upon an idyllic 62-acre farm from 1983 to 1984.

In August of 1984, Heinz, Sigi and their two children Janina and Benni moved to Santa Ynez from Germany. *El Shaklan and twelve other Om El Arab horses moved to the property as well. *El Shaklan became a huge success, and bred over 100 mares every breeding season while he was available to US breeders. 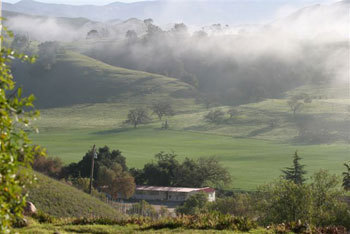 In 1985, Sigi and Heinz decided to go their separate ways. *El Shaklan was sold to Nagib Audi of Brazil during a bitter and drawn out divorce. Eventually, Heinz moved back to Germany and continued breeding horses in the Black Forest under the name Om El Arab. In due course, this breeding program was dispersed.

During that time, Sigi met Jay Constanti and together the couple established Om El Arab International on the very same farm upon which Sigi had established her breeding program. The two began their years together with very few horses. 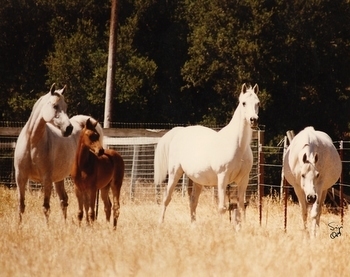 Sigi was able to keep *Bint Estopa,*Bint Shaker, *Bint Jacio, Estopasan, half of *Estopa, and one quarter of *Sanadik El Shaklan. *Estopa had two daughters at Om El Arab International before she passed away in 1993. Om El Shaina was born in 1989 by World Champion Stallion *Carmargue, and the miracle baby, Om El Beneera, by multi-champion *Sharem El Sheikh. Beneera was foaled in 1992 when her dam *Estopa was 27! These mares and the two stallions were the new foundation for Om El Arab International. Each *Estopa daughter has created her own legacy. *Bint Estopa (by *El Shaklan), International Junior Champion Mare of Holland, is found in pedigrees of show winners around the world. Two of her daughters are still at Om El Arab International today: Om El Bandeira (by *Sharem El Sheikh) and Om El Bint Bint Estopa (by *Sanadik El Shaklan). Om El Amira Estopa, who is the dam of several important champions, is owned by Marietta Salas of Mallorca. Om El Gamala Estopa is owned by Albidayer Stud of the UAE. Om El Abadan (*Carmargue x *Bint Estopa) was Reserve World Champion and Supreme National Champion of Saudi Arabia, and was owned by Al Khalediah Stud.

At the age of 27, *Estopa had her last foal, named Om El Beneera. She was never truly weaned and remained by her mother’s side until her death in 1993. Beneera grew up with an air of entitlement and she seems to pass this on to her foals. They are remarkably showy horses who have tons of attitude, snort and blow. Beneera’s first daughter by *Sanadik El Shaklan is Om El Benedict who devastated us in 2009 when she passed away. She has immortalized herself through her incredible offspring. Her most famous daughter is Om El Bernadette, now owned by Al Kalediah Stud, who was the first- ever Junior Champion Mare at the World Cup in Las Vegas. Benedict’s progeny have traveled to all corners of the globe. Her daughter Om El Belusena Dream (by Dreamcatcher SMF) and Om El Bahreyn (by *Bali El Jamaal), both Champions, are owned by AV Arabians of England. Mr. Osman Linjawi of the Kingdom of Saudi Arabia, owns the World Cup Champion Stallion, Om El Beshaan (by Om El Shahmaan). Om El Bernini Dream (by Dreamcatcher SMF) is a very competitive endurance horse and is owned by Shannon Constanti. In 2008, Beneera foaled a beautiful full-sister to Om El Benedict named Om El Benedine that will stay at Om El Arab International and join the broodmare band. We are sure that she is capable of stepping in her beloved sister Benedict’s footsteps. Benedict’s influence will grow far and wide through her son by Om El Shahmaan named Om El Bellissimo. He is on lease to the famous state stud Janow Podlaski. They are expecting nineteen foals by him this year and will breed many mares to this year. We have two beautiful foals by him on our farm already. 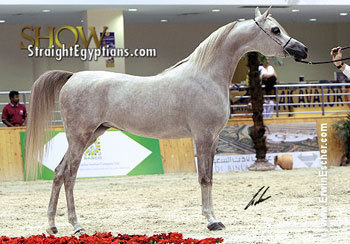 Two other horses were part of the Om El Arab International foundation horses, and together they produced the fourth mare line present at Om El Arab International. They are the Jacio daughter *Bint Jacio, and Estopasan (*Rastano x *Estopa). Together, they produced Om El Jazira, a powerful pure Spanish mare. Bred to *Sanadik El Shaklan, she in turn produced the twice Reserve US National Champion mare Om El Jimala. Jimala is a flagship for the Om El Arab International breeding program and has followers all over the world. Jimala’s full sister Om El Jazmina was National Champion Mare of France twice. Another full sibling, Om El Jahil, is the herd sire for Jose Segundo’s breeding program in Uruguay. We have three amazing Jimala daughters in our broodmare band. They are Om El Shahmaandura (by Om El Shahmaan), Om El Jinaah (by *Al Lahab) and Om El Esprit (by Enzo).

One other mare that deserves mention from those early days is *Bint Shaker (Shaker El Masri x Estasha). She was an incredibly typey mare with so much presence that she could bring tears to people’s eyes. She was unbeaten in the European shows. Today Om El Arab International has her granddaughter the pretty Om El Sophie Dream (by Dreamcatcher SMF), who now has three gorgeous fillies to her credit. They are Om El Sophia (by *Al Lahab) Om El Sophine (by Om El Exquisit) and Om El Sanae Dream (by Dreamcatcher SMF). 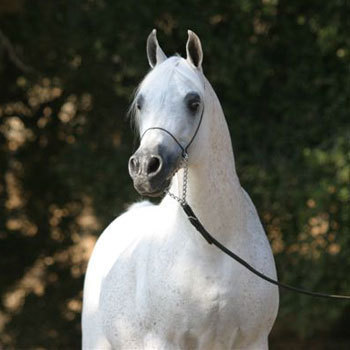 *Sanadik El Shaklan (by *El Shaklan) passed on in the summer of 2008. He has left his incredible mark on the breeding program of Om El Arab International and many breeding programs around the world. *Sanadik sired champions in nearly every country where Arabians are bred, and lives on in his children and grandchildren all around the world. His son Om El Shahmaan has taken the place of his sire at Om El Arab International. Om El Shahmaan now has a son named Om El Bellissimo, who will one day take his father’s place.

In August of 2008, the fourth phase of Om El Arab International started when Jay Constanti decided to pursue different goals and moved away from the farm. The breeding program continues with Sigi and her daughter Janina Merz. The mother-daughter team is passionate about their horses and has a grand vision for the future of Om El Arab International. They look forward to breeding world class horses, and are very excited about the present and the future at this magical place called OM EL ARAB INTERNATIONAL. 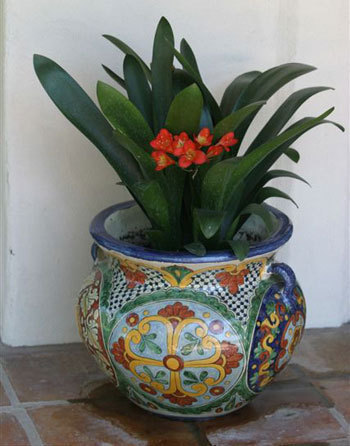 "Our daughter Shannon Constanti participated successfully at one of the most challenging endurance rides in the world, the 2007 Tevis cup in Northern California. She had a rather life threatening incident on the famous Cougar
Rock and was very lucky to survive it. Shannon trained many months for this year's Tevis Cup which was unfortunately cancelled due to the many wildfires. She is planning to ride it in 2009 on OM EL BERNINI DREAM (Dreamcatcher SMF x Om El Benedict, our champion producing mare.)

Wishing you a blessed holiday season from our family to yours!